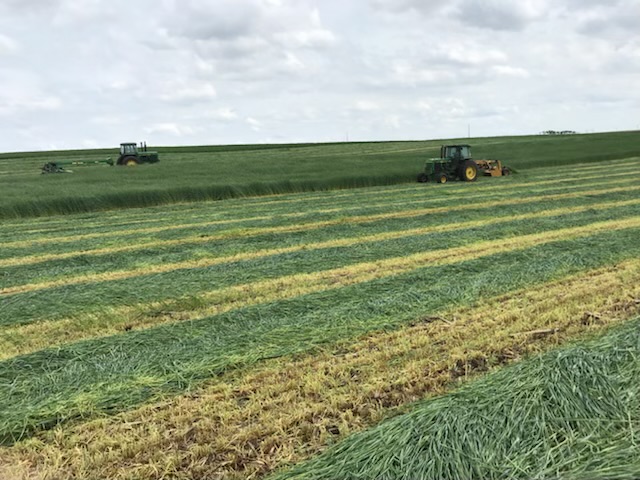 Tadd Meier, LASA board member, has been practicing conservation on his farm for the last 7-8 years. His story is unique in that he didn’t start by testing cover crops. He started planting rye after his corn harvest as a double crop for animal feed. By working with this nutritionist, he worked rye into his feed rations so he could grow more of his own animal feed. However, after the first winter with rye he started to notice improvements in the soil. He had less erosion problems when they would get a big rain fall.

Another conservation practice Meier does is reduced tillage. After he harvests the rye for feed, he stripe-tills, putting nutrients back into the soil and plants soybeans. Depending on the rotation plan, Meier also has tried planting green “live planting” alfalfa into the rye with a drill.  One time he tried planting sorghum sedan grass after killing off alfalfa; however, something he learned in this practice was having too much grass. But was very impressed with how his Sorghum yield turned out without having to use insecticides and herbicides.

People that have helped Meier on this conservation journey are his nutritionist who helps the most with introducing new crops and help from Josh Kamps. Whenever he has a questions Kamps is helpful in bouncing ideas around and is currently helping with the nitrogen trials in the manure study.

Advice he would give a new member just getting started in conservation is there should always be a percentage of your farm that is always experimental – should be trying something new all the time – get out of the mindset of just corn/beans/alfalfa.

He feels LASA is a good source of information for everything from manure regulation laws to fertility for all things pertaining to farming and having access to soil scientists.