Just 10 years ago in Lafayette County, there were very few green fields after harvest and before the traditional spring planting. Now, a drive through the countryside showcases green fields year-round as conservation spreads across the county in the form of cover crops. .

Schilling is proud to say he has always incorporated conservation practices, such as no-tillage and contour strips. The farm also plants cover crops, does split applications of nitrogen and has used a nutrient management plan for the past 15 years. The Schillings plan to plant 1,500 acres of cover crops this year.

“I am proud of what LASA has become and the huge influence we’ve had in our area. I see many cover crops being planted that 10 years ago we would not have seen,” Schilling said. “I feel we have a responsibility to help protect our environment, and I want to do anything and everything I can to protect it.”

Schilling is a board member of LASA, a farmer-led watershed conservation group in Lafayette County with 35 members. The six-year-old group represents 59,307 acres and 92,565 dairy animals, beef cattle and pigs. The alliance collaborates with university researchers, environmental groups and community leaders.

Schilling’s farm has seen many benefits from the conservation practices, especially when it comes to erosion. He said it is most noticeable in the spring when he no longer sees the soil or silt in the ditches; instead, it is cleaner water running. He has also noticed a yield benefit — approximately six bushels an acre on corn and cost savings by doing split applications of nitrogen. He’s also found improvement in soil health and fertility.

“We are applying less product to our fields than what we used to. By utilizing nutrients from the cows’ manure, we are able to use less synthetic products, too,” he said.

In addition to cover crops, LASA members reduced soil tillage on 25,693 acres in 2021. Members also use soil sampling and nutrient management plans. Overall, the group has seen a 67% increase in the number of acres with conservation practices since 2018.

Cover crops and other field practices adopted by LASA farmers are significantly reducing the chance of harmful runoff into streams and lakes, according to modeling-based analysis. The farmers in 2021 potentially prevented an estimated 116,659 pounds of phosphorus from leaving the fields and reduced 29,590 tons of sediment erosion along with reducing carbon dioxide equivalents by 11,680 tons, according to an analysis shared by Wisconsin Department of Agriculture, Trade and Consumer Protection, the University of Wisconsin-Madison, and The Nature Conservancy (TNC).

For comparison, a mid-size dump truck can carry 10 tons of sediment, and 1 pound of phosphorous in a lake or stream has the potential to cause the growth of up to 500 pounds of algae, which can degrade water quality. The amount of greenhouse gas emissions reduced equals 2,540 cars driven for a year.

The modeling-based analysis calculated an estimate of the potential impact of cover crops, low-disturbance manure application and reduced tillage compared to more conventional methods typical to the group’s area.

TNC, a key supporter of LASA, helped complete the analysis, which is based on surveys from the farms.

“LASA farmer members are increasingly adopting sustainable practices to ensure they not only meet the increasing demands of a growing population but also safeguard our water and soils for future generations,” Steve Richter, TNC’s director of agriculture strategies in Wisconsin, said.

By being a member of LASA, Schilling continues to accomplish his conservation goals. He said it helps to have farmer-to-farmer conversations so the farm isn’t doing all of this by trial and error. The Schilling brothers can see new practices in action at field days which sparks their interest in trying them.

“Our farm is proactive, and we are proud to see the growth across the county. Some (farmers) might not be members, but by seeing what’s happening around them, neighbors have taken on the conservation practices,” he said.

*Multiple conservation practices can be used on a farm field

Potential impact of conservation practices in 2021: 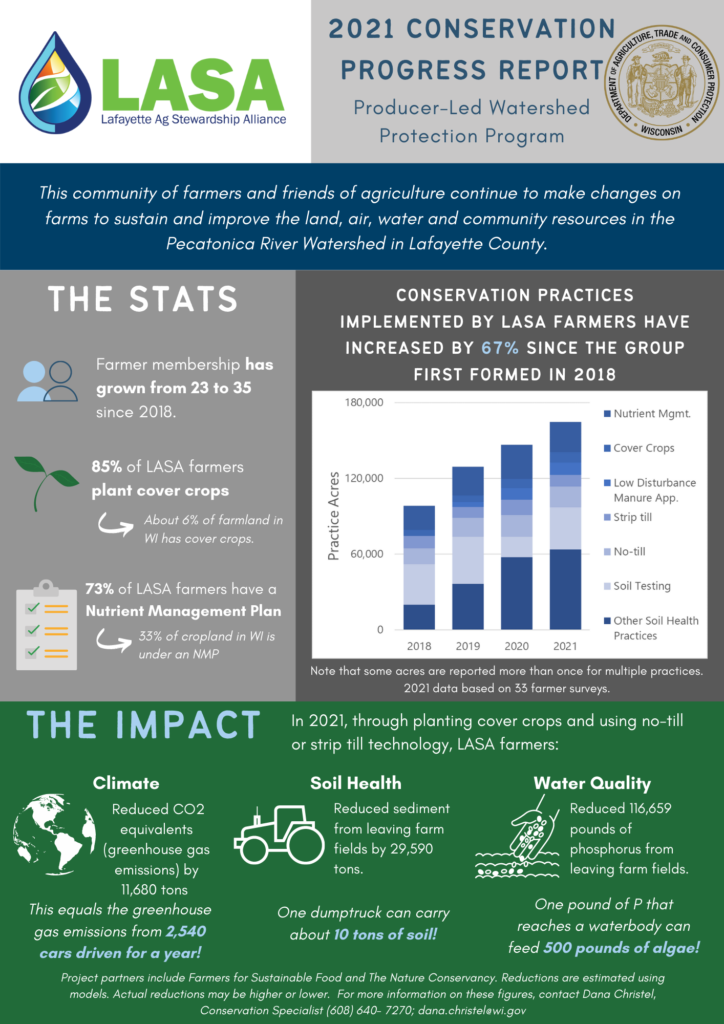